Star-struck students at a Perthshire secondary school have partnered with an Oscar-winning special effects team for a series of out-of-this-world lessons. Blairgowrie High pupils are preparing for a unique collaboration with the legendary Industrial Light and Magic (ILM), the Hollywood company founded by Star Wars creator George Lucas. 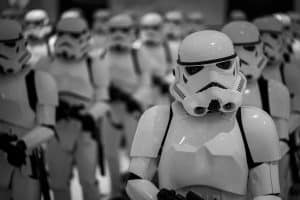 California-based ILM is responsible for the eye-popping visual effects in some of cinema’s best-known blockbusters including Jurassic Park, Back to the Future and the Harry Potter series, as well as recent Disney+ hit The Mandalorian.

Now the behind-the-scenes stars are sharing the secrets of their trade with a lucky group of 15 S3 pupils at Blairgowrie.

All pupils will have the chance to develop their own movie storyboard and get feedback from the experts.

The five-day course – the first of its kind in the UK – came about after a chance encounter between the school’s project officer Melissa Lawrence and ILM’s emerging talent specialist Amy Backwell.

The aim is to give pupils at rural schools like Blairgowrie High a better chance to get pursue a career in the world of Hollywood special effects.

“At Industrial Light and Magic, we understand how important and influential outreach has on the younger generation,” said Ms Backwell. “It’s so important that as many young people as possible understand a career in this industry is possible if they work hard and believe in themselves, no matter what the background.”

She said: “We’ve had the privilege to work with amazing charities like Speakers For Schools that help ensure our emerging talent programmes reach schools in all corners of the nation. I met Melissa at the Festival of the Future event last year in Dundee and quickly understood the need to invest in amazing schools like Blairgowrie that are in rural areas as it’s harder for them to access opportunities. London isn’t on their doorstep.

“Blairgowrie High School is officially the first school we have worked with in creating a bespoke work experience programme. This challenging time has opened our eyes and made us realise that we can achieve amazing things virtually.”

The programme, including lessons in modelling, lighting and animation, has been developed by VFX technical trainer Davi Stein and VFX supervisor Andrew Whitehurst.

Headteacher Bev Leslie added: “I am absolutely delighted that Industrial Light and Magic have chosen to offer such a unique experience to Blairgowrie High School pupils.