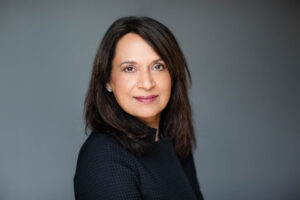 Baroness Ruby McGregor-Smith CBE is the Chair of Mind Gym PLC and the President of the British Chambers of Commerce. She also chairs the Institute of Apprenticeships and Technical Education and the Air Operators Association . She is a non executive director for the Tideway Tunnel.

Ruby was the Chief Executive of MITIE Group PLC, the strategic outsourcing company which employed over 65000 people during her tenure and became the largest Facilities Management business in the UK.

She joined MITIE in 2002 as the Chief Financial Officer, became Chief Operating Officer in 2005 and was appointed as the Chief Executive Officer in 2007. She is one of a small number of women who have held the position of Chief Executive in the FTSE 100 and FTSE 250 and is the first Asian woman to be appointed in such a role within that group of companies. Whilst at Mitie the Group revenues grew from £500m to £2.2 billion.

She was recognised as a top 50 female world business leader by the FT in 2013.

Ruby was also an Independent Non-Executive Director of PageGroup plc from 2007 to 2017. She chaired the Audit Committee, was a Member of Nomination and Remuneration Committees and also latterly their Senior Independent Director. PageGroup has 35 years expertise in professional services recruitment and operates in 37 countries worldwide.

Ruby is a member of the House of Lords , having been granted a Life Peerage in 2015 and is a member of the Risk Assessment and Risk Planning Committee. She is responsible for the Independent Report to the UK Government on Race in the Workplace published in February 2017 .She was the Chair of the UK Government’s Women’s Business Council between 2012 and 2016 and a Business Ambassador for the UK from 2012 to 2019. She was appointed by the UK Government to be the In – Work Progression Commissioner in 2020.She is a Fellow of the Institute of Chartered Accountants in England and Wales and was awarded the Outstanding Achievement Award in 2015, the professions’s most prestigious award.