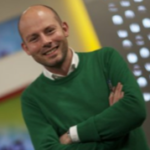 Adam is an award-winning TV series producer, achieving 11 industry awards (including 4 consecutive National Television Awards) and BAFTA shortlisted for digital creativity. He is also a previous participant on the Royal Television Society awards judging panels and a member of the Edinburgh Television Festival Advisory Committee. Having worked with Channel 4, ITV and the BBC, Adam is particularly keen on demystifying the TV sector for students and outlining the various opportunities available in the industry.