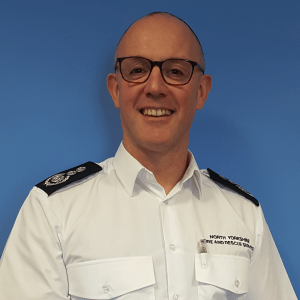 Andrew joined Cumbria Fire Service as a teenager in 1990. This followed primary education in Northern Ireland and Glasgow secondary school, leaving with a handful of ‘O’ grades,. During childhood he was heavily involved in Scouting, eventually becoming an assistant leader with the 69th Disabled Scouts in Glasgow. He puts this experience down to his successful interview for the fire service. His first and last jobs before the fire service were as a pot washer in a coffee shop and in a Chinese restaurant in Bowness on Windermere.

It was a tough beginning in the fire service. Andrew was only 19, spoke with a pronounced stammer and didn’t embody the typical image of a ‘fireman’. He dealt with significant abuse, overcame significant barriers, demonstrated resilience and eventually gained in confidence and ability.

His career has taken him to the London Fire Brigade, Leicestershire Fire and Rescue Service and now to North Yorkshire as Chief Fire Officer. There have also been secondments to Central Government and the Audit Commission.

Andrew is untypical of the stereotyped image of a firefighter. He speaks about the privilege he had as a white, protestant in Northern Ireland, and as a white male in society, brought up in a fairly middle class family. He also talks of the barriers and challenges throughout life, being sexually fluid in a macho, male dominated environment. He speaks of ‘fitting in’ for many decades before finally emerging as a confident, able person with ambition and value to add.

Andrew has a voice in the fire service on Equality, Diversity and Inclusion. He cares deeply about all people in society having fair and equitable opportunities, and the need to reduce privilege and enable social mobility.

As Chief Fire Officer, Andrew is responsible for service delivery, staffing and enabling services for the 38 fire and rescue stations, control room, incident command suite, Transport & Logistics, Occupational Health, Training Centre and headquarters. He leads 750 staff and operates a £35m budget. The service protects 820,000 residents across North Yorkshire and City of York, the largest geographical area of any English fire and rescue service.