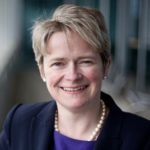 Dido has recently been appointed Non Executive Chair of NHS Improvement. NHS Improvement is responsible for overseeing foundation trusts and NHS trusts in England, as well as independent providers that provide NHS-funded care. She is a non-executive director on The Court of The Bank of England and Chair of the Bank’s Remuneration Committee. She was Chief Executive of TalkTalk Telecom Group PLC from 2010 to May 2017. Prior to TalkTalk, Dido was Sainsbury’s convenience director, having been appointed to Sainsbury’s operating board in March 2008. Dido joined Sainsbury’s from Tesco PLC where she held a variety of senior roles both in the UK and international businesses. Prior to this, she worked at Kingfisher plc and Thomas Cook Limited where she gained considerable retail experience. She has also served on the boards of The British Land Company PLC and Cheltenham Racecourse. She is a trustee of Doteveryone and a member of the UK National Holocaust Foundation Board. In August 2014 Dido was offered a Peerage and sits in the House of Lords as a Conservative Peer. She was appointed to the Economic Affairs Committee of the Lords in July 2017. Dido is married to politician John Penrose, has 2 children and in what spare time she has left is a jockey and racehorse owner.