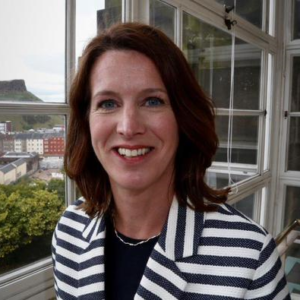 Catherine Calderwood has been the Chief Medical Officer for Scotland since 2015.

As a medical adviser to the Scottish Government she was instrumental in the work which has led to a 20% reduction in the number of stillbirths across Scotland. She continues to support this work and the work in reducing neonatal deaths and avoidable harm in maternity services. She has overseen the development of a Major Trauma Network for Scotland. She is Chair of the Taskforce for the Improvement of Services for Victims of Rape and Sexual Assault, the Committee on Antimicrobial Resistance in Scotland and the Scottish Global Health Collaborative and is a member of the Advisory Council on Women and Girls. She has published physical activity guidelines for babies and children, pregnant women and adults and low risk drinking guidelines along with the Chief Medical Officers in England, Wales and Northern Ireland.

Catherine has published four annual reports on Realistic Medicine. Realistic Medicine puts the person receiving health and care at the centre of decision-making and creates a personalised approach to their care. Her second report published in February 2017 builds on the first report by setting out a vision and priorities: showcasing international and national multi-professional support from clinicians, leaders from medicine and public health and stakeholders from a wide group of organisations. Her third report published on 20 April 2018 will help embed Realistic Medicine and allow the spread of good practice which has been seen throughout Scotland. On 25 April 2019 her fourth report Personalising Realistic Medicine was published. This report explores personalising realistic medicine for patients and staff and recognizes the importance of valuing and supporting staff as vital to improving outcomes for the people in their care. These reports have been universally well received and read by millions of people across the world.