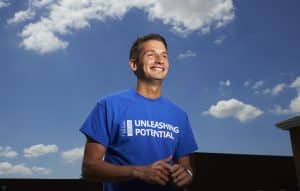 David is an entrepreneur, a proud 2x TEDx speaker (with over 100,000 views) and author who dedicates his life to connecting people with their own ideas. He does this via his ideas company 7billionideas, which operates in both the education and the corporate sector. 7billionideas has become an award-winning company in both of these industries and David was a finalist at the UK Business Awards in the category of ‘Entrepreneur of the Year’. Three words which would summarise David’s values and approach to work would be – Respect, Logic & Vision.

David made the leap from the corporate world to become an entrepreneur after spending the best part of a decade working for the technology giant IBM. At the age of 24, he was responsible for a multi-million dollar business and at 26 became the youngest Band 9 in the world, which was recognition of his potential on an international level. He decided that he needed to go and live and breathe his passion for connecting people with their own ideas. David truly believes that every single person on this planet has an amazing imagination and can change the world.

David is proudly the Director of Entrepreneurship at Harrow Hong Kong & Bangkok and the British School of Jakarta. He has also held the position of Entrepreneur in Residence at Surbiton High School in London for the last 5 years and the first school in the world to make such an appointment. The education arm of 7billionideas has worked with over 100,000 students in 500+ schools in the UK and across the world including Dubai, Hong Kong, Thailand, Indonesia, Austalia and Europe. We’ve worked in every learning environment from International Schools to Multi-Academy Trusts to Young Offender units.

David is also very proud to be a husband to Jenny and father to 2 beautiful boys – Toby and Harry.

In his spare time, he is an ambassador for African Promise and regularly raises money for the charity by running half and full marathons (including London in 2018). He also is incredibly passionate about cricket and is a playing member for the MCC. His dream came true of playing at Lords in 2019.

https://youtu.be/r_5vfOyiiZc
TEDx - How We Can All Embrace A World Class Mentality