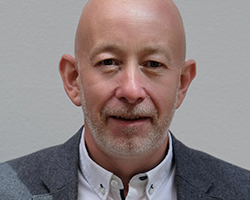 Derek is CEO and Co-Founder of Coffee & TV, an independent visual content studio, specialising in creative VFX, animation, design and colour grading.
Since he founded the company in 2012, he has been responsible for the studio’s incredible success, from a start-up to a profitable, multi-million pound business with a diverse roster of clients across commercials and broadcast.

Before establishing Coffee & TV, Derek was one of London’s most renowned visual effects artists, working with many celebrity superstars, from Coldplay to George Michael and big brand clients; including British Airways, Renault and L’Oreal. His determination, work-ethic and eye for detail, garnered him a stellar reputation at the highest level.

Derek moved into management in 2005 with his purchase of post-production company Clear. In less than three years, he turned it around from being in administration, to being a successful and profitable enterprise, which was bought out by an international.

Derek’s life now is a fascinating mixture of creativity and business. Along with running his own company, Derek also acts as an advisor to a number of diverse and exciting companies and is a frequent speaker at international events.