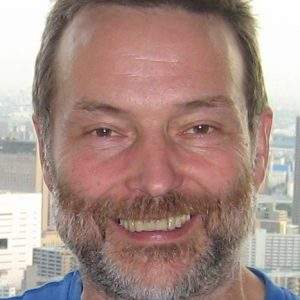 Alistair went to a Wilmslow Grammar School, where he took 9 O-Levels and then A-Levels in Physics, Maths and Chemistry. He went from there to the University of Warwick, graduating in 1977 with joint honours in Physics and Computer Science.

At that point he took a year out to work in a children’s home in Kent. He then resumed his academic career, at the Pennsylvania State University. There he took a taught MSc in Computer Science, also working half-time as a teaching and research assistant.

He moved on from there, in 1984, to undertake a PhD, full-time at the Open University, in Milton Keynes. He completed his PhD in 1987, with a thesis entitled ‘Adapting User Interfaces for Visually Disabled Users’. This was the start of his interest in novel forms of human-computer interaction, in this case particularly the use of speech and non-speech sounds.

He stayed on at the Open University for another two years as a temporary Lecturer in Educational Technology. He then moved on to the University of York as a Lecturer, and subsequently Senior Lecturer in Computer Science. Here he continued to pursue his research interests in multi-modal forms of human-computer interaction, particularly in meeting the needs of users with particular access requirements. He led and was involved in a number of projects with funding from sources including the European Union and the Engineering and Physical Sciences Research Council (EPSRC). He has over 70 refereed publications as well as seven books that he (co-) authored or edited. Most of the papers were published in conferences (such as ACM Chi). He also supervised a number of PhD research students.

He also enjoyed the opportunity to teach a variety of modules, to both undergraduate and masters-level students. These ranged over a number of topics, from Algorithms and Data Structures to Web Design. He also gave occasional lectures on topics such as Ethics in Student Projects (having chaired the Ethics Committee) and Presenting Your Conference Paper.

In 2017 he retired from his full-time post, but remains as an Honorary Fellow of the University. He now has time to pursue other interests, particularly sailing, in Greece. He also makes the most of his family, including a young granddaughter. He maintains an interest in academic work, particularly writing a book, provisionally entitled, ‘That Which We Call a Rose’, on the names that we give things.