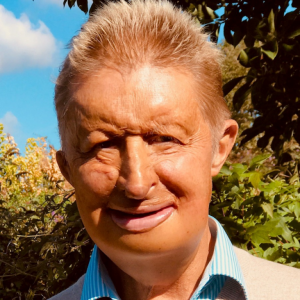 James Partridge is the Director of Face Equality International, a Guernsey charity which he launched in November 2018. Face Equality International is an alliance of NGOs and charities around the world — already 30-strong after just six months — which work together to campaign for ‘face equality’ and challenge disfigurement prejudice and discrimination. The alliance’s website is here: www.faceequalityinternational.org.

Previously, he was the Founder (in 1992) and was until September 2017, Chief Executive of Changing Faces, the leading UK charity supporting and representing people with disfigurements, www.changingfaces.org.uk. He launched the charity after the positive response to his book (passing on lessons from his experience of severe facial burns at the age of 18), published by Penguin (1990), Changing Faces: The Challenge of Facial Disfigurement (available from JP).

He writes and presents widely on disfigurement, disability, inclusion and social entrepreneurship in the UK and internationally — and achieved an international profile by becoming the first newsreader with a facial disfigurement on any TV news channel, Channel 5, in November 2009.

Before setting up Changing Faces in 1992, James worked as a health economist in public health in the NHS in the 1970s, and in the 1980s, he established a dairy farming business in St Andrew’s in Guernsey and taught A level economics at The Ladies’ College.

He has won a number of national awards such as in 2010, the Third Sector award for Most Admired Charity Chief Executive and the Beacon Prize for Leadership. He has also served on public bodies such as the National Institute for Clinical Excellence and the Dept of Health’s Independent Reconfiguration Panel.