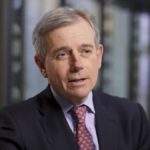 Dr Richard Ward joined Cunningham Lindsey as Executive Chairman in June 2014. Cunningham Lindsey is the leading global provider of claims management and risk service solutions, with an operating platform of over 7,000 employees in 60 countries.

In addition to Cunningham Lindsey, Richard is Non-Executive Chairman of Brit plc, a market-leading global speciality insurer and reinsurer. He also serves as a Non-Executive Director of Partnership Assurance Group plc. Richard is a member of the PRA Practitioner Panel, Bank of England and also sits on the PwC Advisory Board.

Prior to these roles, Richard was Chief Executive of Lloyd’s, from 2006 – 2013. Lloyd’s is the world’s leading specialist insurance and reinsurance market, writing $37.5bn of business per annum and paying claims of $10-$15bn in over 200 countries and territories.

Prior to the IPE, Richard held a range of senior positions at British Petroleum (BP) and was Head of Marketing & Business Development for energy derivatives worldwide at Tradition Financial Services.

Between 1982 and 1988, Richard worked as a Senior Physicist with the Science and Engineering Research Council, leading a number of research and development projects.

Richard has a 1st Class Honours degree in Chemistry, and a PhD in Physical Chemistry from Exeter University. He is married with two children and lives in London.