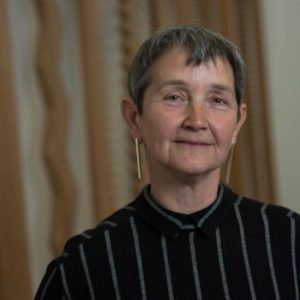 Frances Morris has played a key role in the development of Tate, joining as a curator in 1987, becoming Head of Displays at Tate Modern (2000–2006) and then Director of Collection, International Art until April 2016 when she was appointed to her current role. She has continually worked to re-imagine Tate’s collection and has been instrumental in developing its international reach and its representation of women artists. Frances was jointly responsible for the initial presentation of the opening collection displays at Tate Modern in 2000, which radically transformed the way museums present the story of modern art. She has curated landmark exhibitions, many of which were large-scale international collaborations, including three major retrospectives of women artists including Louise Bourgeois in 2007, Yayoi Kusama in 2012 and Agnes Martin in 2015.

Earlier in her career Frances Morris curated Paris Post War: Art and Existentialism in 1993 and in 1995 she worked with Stuart Morgan on the exhibition Rites of Passage. Specialising in post-war European and contemporary international art, she has published widely on the subject and has also curated projects with many contemporary artists from Britain and abroad, including Miroslaw Balka, Chris Burden, Genevieve Cadieux, Sophie Calle, Mark Dion, Luciano Fabro, Paul McCarthy and Nicholas Pope.