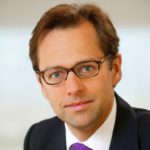 Huw van Steenis has been appointed as Global Head of Strategy and member of the Group Management Committee at Schroders from November.

Huw joins Schroders from Morgan Stanley where he was a Managing Director and Global Head Banks and Diversified Financials Research. During his 14 years with Morgan Stanley he drove award winning research on the investment management and securities industry. He has won numerous investment awards including being voted #1 in investor surveys 12 times and twice Starmine’s stock picker of the year for financial services. . The Evening Standard’s City Editor wrote ‘It would be rash to bet against Steenis’. He coined several terms which have become industry standards including the ‘Asset Management Barbell’. Prior to Morgan Stanley he worked at JPMorgan and Boston Consulting Group.