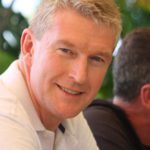 Ian Twinley joined Ford Motor Company in 1979 as an Engineering Trainee. He finished his apprenticeship in 1983 and then held a number of appointments in Ford of Britain, Ford of Europe and Ford U.S.A. Ian also attended a Ford sponsored Management MBA Program.

In 2002 he joined John Grose Group as Chairman. John Grose is a multi franchise Dealer Group established in 1888 with a turnover of £150 million, employing over three hundred staff. John Grose has won the Chairman’s award for Customer Satisfaction 20 times, and is ranked one of the top Ford Dealers in the Country.

Ian travelled to Afghanistan in 2008 and spent time with Suffolk based reservists serving in Kandahar and Camp Bastion. He is a Deputy Lieutenant of Essex and voluntary Chair of the East Anglia Reserve Forces & Cadets Association.

Ian was Chairman of Team Ipswich for five years and a Trustee of the Inspire Suffolk Charity for three years. He was made an Honorary Fellow at the University of Suffolk and is a visiting Ambassador at Suffolk New College. Ian enjoys spending time motivating the students. Ian is the Honorary President of the Norfolk and Suffolk Skills Shows. An initiative that attracts over 5000 students at each event.

Both he and his wife Alison have a passion for historical buildings. They are custodians of two Georgian parkland properties, one being an wedding venue. They are also keen fundraisers and events at their home have raised over £500,000 for local charities. Ian is a Patron of the Helen Rollason Cancer Charity.

Ian’s participation has been made possible through Speakers for Schools partnership with the UK Automotive 30% Club and his school talks will include a focus on inspiring girls to consider opportunities in the automotive sector and encouraging all students to aim high.