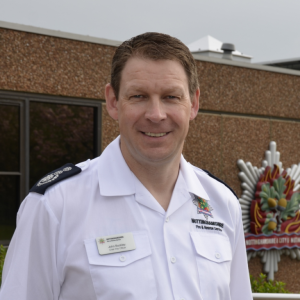 John began his fire and rescue service career in Derbyshire in 1994 as an on-call firefighter. In 1996, after a 10-year career in the textiles industry he then joined Nottinghamshire Fire and Rescue Service as a wholetime firefighter. In his early years, he held various operational roles, becoming a Trainer at the Service Development Centre in Ollerton and a District Manager in Service Delivery.

In 2005, John was appointed Area Manager holding a number of departmental managerial roles and leading on significant projects around shift change and workforce flexibility. In 2008 he became Assistant Chief Fire Officer and subsequently Deputy Chief Fire Officer with responsibility for Service Delivery.

In April 2014 he progressed to the role of Chief Fire Officer / Chief Executive and leads a workforce of 900 staff in the delivery fire and rescue services to the communities of Nottinghamshire.

In 2009 he graduated from Nottingham Trent University having undertaken his Masters’ degree in Public Sector Management, and is also proud to have completed the Top Management Programme through the National School of Government.

John is active within the National Fire Chiefs Council where he is the Chair of the Finance Committee representing the professional views of the sector to Government, and is Secretary for the East Midlands Regional Strategic Board. He is also Regional Chair for the Fire Leaders Association.

His vision for Nottinghamshire Fire and Rescue Service is based on three principles: delivering high quality services; good governance and financial sustainability and maintaining an engaged and motivated workforce. This has been evident during his tenure as Chief Fire Officer as he has led the organisation through significant change.

John is passionate about The Fire Fighters Charity due to the support it provides to fire and rescue service staff and their families. He is the Service Champion and gets involved in many local activities including an annual Chief’s Challenge which usually raises over £10,000 for the charity.

When he is not on duty, John enjoys spending time with his family and their pets and escaping to the inland waterways on their much-treasured narrowboat.