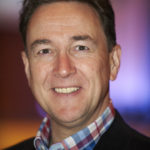 Influencing and entertaining audiences for a living was probably a strange choice for someone who has always been shy (and bullied at school) yet in a career spanning 36 years, Jon Hammond trained as an auctioneer, sold soft drinks to major retailers, was a DJ in (and then ran) European nightclubs, hosted his own show on commercial radio, before moving to the BBC to present radio and television programmes from game shows to serious documentaries.

Jon has interviewed presidents and prime ministers, business leaders (and business losers!), stars of screen, stage and the music world and hosted events all over the globe both in the business field and large scale outdoor and arena entertainment.

Unusually, he is as totally at home standing in front of 50,000 people as he is sitting and chatting with a small group of friends.

He is now in the fortunate position of working with leaders of some of the biggest companies across the world, advising them on how to effectively and confidently communicate and ‘connect’ with their staff, their colleagues and their customers.

‘Our ability to connect with those around us will have a massive impact on our life and career and will undoubtedly play a part in our long term success – whatever direction we choose’.

‘I really enjoy sharing some of the insights I have learned (often the hard way!) and talking about the stuff I wish someone had told me when I was at school’