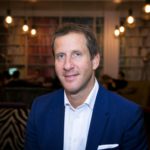 Josh left Sussex University with a degree in Social Anthropology and Development and joined Initiative Media as Graduate TV Buyer. After a year of being bullied and shouted at, he opted for the more cerebral side of agency life as a planner for the next few years. In 2000, his curiosity led him to a completely different experience at ad agency and co-operative St. Luke’s where he was a comms planner. Here he became increasingly involved in digital and at the age of 28 he saw an opportunity to set up his own digital agency, Kword which he ran profitably for 3 years. While this an expansive and quite lucrative experience, it was also lonely. He missed working with big teams, big brands and ambitious clients. So he folded Kword it into the leading digital agency (at the time) BLM Quantum where he became Deputy MD. Quantum was acquired by Havas and Josh joined the Havas Digital Global board as Client Development Director. He led best practice for key global clients and became particularly interested in business transformation spending most of this time restructuring Havas Digital’s New York and Boston offices.

In 2011 he was brought to MediaCom as COO for the EMEA region where he worked with local markets and in particular markets that needed transformation. In 2012, Josh was offered the opportunity to come back into the UK as MediaCom’s UK COO.

In December 2015 Josh was promoted to CEO. He is responsible for setting the agency vision, delivering growth through new business, organic growth, diversification and future-proofing the business. He leads a number of the agency’s client relationships, large and small.

Josh lives in Highgate with his wife Deb who is an architect and two children Ruby (7) and Leo (5).
He is a long-suffering Arsenal supporter, lover of music, theatre, film, art and telly.

He is heavily involved in charities focused on taking privilege out of the employment equation. He is a trustee of two: The Transformation Trust and Futureversity, both of which work with children from deprived backgrounds developing soft skills, self-esteem and making them ‘job ready’.

Josh is also a founding member of the MS Society Appeal Board, a team of people focused on raising £100m to Stop MS in its tracks.