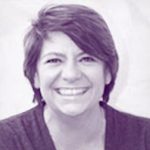 Kathryn Jacob is CEO of Pearl&Dean, the cinema advertising company.
She was the first girl in her family to go to University and when she left she joined a regional newspaper group as a graduate trainee, still not sure what she wanted to do. This is not really a great idea but she was lucky that she loved the work.
Since then, she has worked at The Daily Telegraph, IPC Magazines and Virgin Radio where she listened to music all day and tried to convince her parents she had a proper job.
Virgin Radio became part of Ginger Media Group and Kathryn worked across the group as Commercial Director. The company was sold to SMG in 2000 for £225 million pounds and Kathryn then worked across Scottish Television, Virgin Radio, Pearl&Dean and Primesight (a poster company) before becoming CEO of Pearl&Dean.
Since joining the company the team has created the world’s first 3-D interactive advertisement for 02, brought pop up cinema to all parts of the UK, worked with Virgin Atlantic and Ambassador Theatre Group on new ways to reach consumers as well as eaten a lot of popcorn.
Kathryn sits on the Development Board of Women’s Aid, the Advertising Association Council and the Government’s Expert Group on Body Confidence.
She is married with 2 children, one of them thinks she sells pick and mix for a living