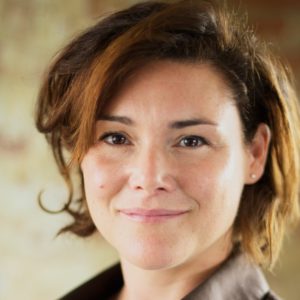 Katie Swinden is the Former Creative Director of Fifty Fathoms.

Katie produced MARVELLOUS, Fifty Fathoms’ debut production, in 2014. Prior to this, she produced RTS award-winning PEAKY BLINDERS for BBC Two, and series one and two of the Emmy–nominated and RTS-winning LUTHER for BBC One. In between, she was made an Executive Producer at Left Bank Productions in 2011.
Katie started her producing career in 2007 – following her work in development at Pearson Television and as a script editor for Yorkshire TV, BBC Drama and Kudos Film & Television – when she produced the sixth and seventh seasons of SPOOKS [MI5 in the US], which received BAFTA & International Emmy nominations.
She has also worked extensively with the Latimer Group, leading schemes to help young talent from non-traditional media backgrounds make their first steps into the industry. In December 2014, Katie received the ENVY Producer Award at the 2014 Women in Film and Television Awards for both her body of work, and her commitment to working with young people