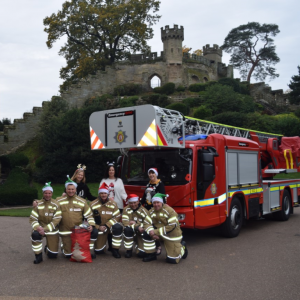 Kieran started his fire and rescue service career in January 1990 with the then Surrey Fire Brigade, serving in a broad range of roles including all frontline operational ranks, Training School, Technical Services, Fire Safety, Operational Development and Major Projects up to Group Manager.

Within that time he was also seconded into the New Dimension Programme to support the development and roll-out of Fire National Resilience capabilities and later was seconded back as the Fire national lead on Chemical, Biological & Radiological – Detection, Identification & Monitoring (DIM), some might say an unfortunate yet oddly appropriate mnemonic for Kieran!

In this capacity he was also a national Military liaison and involved in the national preparation and delivery arrangements of the London 2012 Torch Relay and Olympic Games.

He joined Warwickshire Fire & Rescue Service in March 2019 as Chief Fire Officer, a role that he feels very privileged to undertake and is an active member of the National Fire Chiefs’ Council.

Kieran counts himself a lucky man and likes nothing more than spending time with his wonderful family.