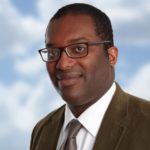 Kwasi Kwarteng has been the Conservative Member of Parliament for Spelthorne since 2010.

The Spelthorne Constituency is geographically small (about six miles by four). It is bounded on the south by the Thames, to the north by Heathrow Airport, to the east by the London Boroughs of Hounslow and Richmond and to the west by Berkshire.

It is mainly urban, but still has some open Green Belt areas. It also has many reservoirs and flooded gravel pits (20% of its area is under water). It also includes many of Heathrow Airport’s off-airport facilities

Prior to entering Parliament Kwasi worked as a financial analyst, journalist and author.