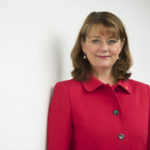 Former Leader of Plaid Cymru and Assembly Member for the Rhondda

Leanne Wood was born in the Rhondda where she still lives today with her family.

She was educated at Penygraig Junior School, Tonypandy Comprehensive School and the University of Glamorgan, from where she graduated with a degree in Public Administration. Before becoming an Assembly Member for the South Wales Central region in 2003, she worked as a probation officer and a professional tutor at Cardiff University. She has also worked as an outreach worker for Cwm Cynon’s Women’s Aid.

In March 2012 Leanne became leader of Plaid Cymru – The Party of Wales, the first woman to be elected to that role.

In May 2016, she overturned a Labour majority of 6,739 to become the first woman to represent the Rhondda at Assembly or Westminster level.

Away from politics, her interests include reading and gardening.