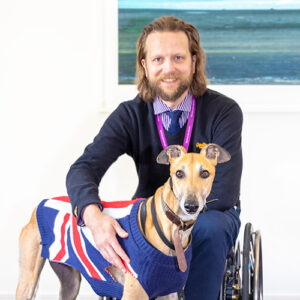 Mat is an internationally respected adviser in emerging technology, strategy and governance. He became one of the youngest people to be appointed a Non Executive Director of a major government department – the Department for Culture, Media, and Sport – and went on to Chair the review of UK Anti Doping during the international doping in sport crisis.

In 2009, Mat suffered a spinal injury and was told to ‘mourn the life he’d lost’, with an expectation he would be bedridden from then on.

Instead, Mat became a multiple world cup medallist, one time world championships medal winner for TeamGB and captained the men’s wheelchair fencing teams on multiple occasions at major international competitions. Mat also helped to set up one of the largest wheelchair fencing clubs in the country, supported by Olympic coaching staff.

Mat was the first person to be appointed as a Senior Fellow in Novel Medical Technologies at a Medical School – University of Birmingham – following his work on more than 350 national medical technology reviews.

In March 2020, in response to the Covid-19 outbreak Mat designed and launched the ‘AerosolShield’ miniature clinical isolation tent in six days. This product has not only significantly reduced the risk of cross-contamination for thousands of NHS health professionals, but has gone on to be acclaimed as a ‘top 10 medical innovation worldwide’ by The Times.

Also during the global pandemic, in response to the ever increasing pressures on families and the most vulnerable, Mat launched Ted’s Light CIC, a not for profit organisation, providing comfort to young children entering emergency foster care.