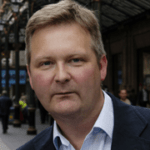 Director of Communications and Public Affairs, University of Glasgow

I was brought up in the small Berwickshire town of Eyemouth and went to Eyemouth High School from 1976-82. At that time, it was, to say the least, unusual for anyone from my community to go to University. When I was in S2 an ex miner who had retrained to be a history teacher arrived at Eyemouth. He fired my imagination, pushed me to study and to do exams and virtually wrote my UCAS form.
Though University is not for everyone, I made it to Edinburgh and then Aberdeen where I graduated with a degree in history. I had always dabbled in journalism and in 1987 I joined the BBC, rising to be a senior news editor and covering some of the biggest stories of the age – including the Piper Alpha disaster, the Lockerbie bombing, the Dunblane shootings, the collapse of communism in eastern Europe and the fall of Thatcher. I edited Good Morning Scotland on BBC Radio, Newsnight Scotland on TV and was either deputy or assistant editor on the Today programme, Reporting Scotland and BBC Radio 5-Live. I also produced a number of features and documentaries – and in my spare time wrote three non-fiction books. All were adapted for broadcast.
In 2011 I joined the University of Glasgow and since 2015 I have been Director of Communications and Public Affairs where I head a small team delivering on external, internal and student communications, social media and public engagement.
I am genuinely passionate about tapping into the potential that all young people have. For some the career choice might be through higher education. For others it could be apprenticeship or even straight into work. There is no single path to success or happiness, but nor is there a limit to ambition.