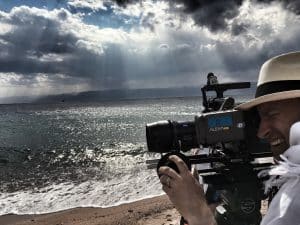 Piers Leigh is a London and Bristol-based Director of Photography whose work regularly takes him all over the world. Piers has shot drama, docu-drama, short films, idents, trails and viral campaigns as well as high-end documentaries for both UK and US broadcasters. He has filmed in over 60 countries and in every environment on the planet, from the Arctic to the Antarctic.

Most recently, Piers has continued to move into more scripted formats, including a new 6-part series for Amazon Studios, starring Grand Tour’s Richard Hammond and Mythbuster’s Tori Bellicci. Piers was Series DoP with a large camera team, working on a completely unique show to highly demanding UHD technical specifications. This was the latest project in a line of hybrid formats and dramas which Piers balances with an intense schedule of blue-chip documentary series.With a valid I-Visa enabling him to shoot in the US, over the last 20 years Piers has worked on a wide range of documentary programme styles including travel, observational, reality and interview shows. He has worked with many prominent presenters and has filmed on numerous challenging adventures and expeditions, including trekking and camping plus investigative undercover filming.

He is often asked to film in demanding and extreme conditions including deserts, mountains, jungles, open ocean and ice-waterfalls. He is confident shooting from helicopters and planes with mini-cams and underwater rigs. Piers is happy working in any environment and in any genre, with a wealth of industry contacts