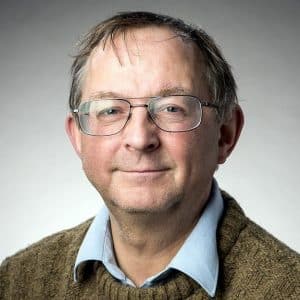 Chris Budd OBE, is based at the University of Bath, where he is Professor of Applied Mathematics. He is also Professor of Maths at the Royal Institution and Gresham Professor of Geometry. He has also been the Education Officer of the London Mathematical Society, and Vice-President of the Institute of Mathematics and its Applications.

Chris has a strong interest in the practical applications of maths to real world problems, and has worked in many areas, including food distribution and cooking, climate change, weather forecasting, electricity supply, telecommunications, aerospace and saving the whales. His algorithms are now incorporated into the Met Office operational weather forecasting code where they have made a significant difference to their accuracy. He is also interested in the recreational side of maths, including magic, voting, origami, and folk dancing. Most recently he has been working flat out to apply mathematical modelling methods to help in the fight against COVD-19. He is very happy to talk on any of these topics, at any level.

The advancement of the public understanding of and engagement in science and mathematics has been a central element of his career. He has been involved in developing successful programmes with young people through his positions at the Royal Institution and the Institute of Mathematics and its Applications. One of the most significant of these projects is the Bath Taps into Science Festival, a major hands-on science festival which has won many national prizes since its establishment in 2001. He was awarded an OBE in 2015 for services to science and mathematics education.

When not working he likes walking in the mountains with his dogs.