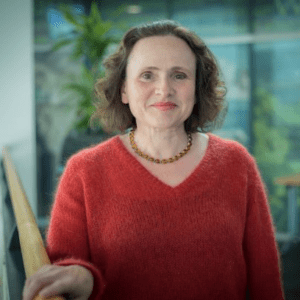 Penny Endersby became the Chief Executive of the Met Office in 2018, the first woman to hold the position. She is a physicist and engineer by training, with a distinguished career as a government scientist and leader, mostly in the Ministry of Defence. Penny grew up in London and studied Natural Sciences at Cambridge University with the help of scholarships from WISE and British Gas. She joined the MOD as an armour researcher, conducting explosive trials and becoming the national expert on smart and electrically powered armour systems for fighting vehicles. At Dstl she led first the Physics Department and then Cyber and Information Systems Division before becoming the Chief Technical Officer. She was instrumental in building up Dstl’s capabilities in cyber and data science research, and increasing their pipeline of innovative research and intellectual property.

Penny is a visiting professor in the Electronics and Computer Science Faculty at Southampton University. She has been a trustee of the Institute of Physics and Wiltshire Wildlife Trust, a director of Ploughshare Innovations Ltd and was elected FREng in 2021. She has a strong interest in diversity and inclusion in which she has played a leading role at Dstl and Southampton as well as driving improvements at the Met Office.

In personal life Penny is married to a teacher, they have two musical grown-up children. Both of them love to hike the beautiful moors and coasts of South Devon. Penny is a keen naturalist and musician, and an active member of Exeter Cathedral, including as a singer and adviser to Chapter on ecological issues.