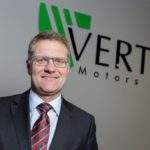 Robert is the CEO of Vertu Motors PLC, who are the 6th largest automotive retailer in the UK. He was previously a director of Reg Vardy PLC between 2001 and 2006. He was appointed as Finance Director in 2001 and Managing Director in 2005, until the sale of the business to Pendragon PLC in 2006. Robert qualified as a chartered accountant with Arthur Andersen. He is also a member of the Economic Growth Board of the Confederation of British Industry and Vice-President of the Automotive Fellowship International. Robert is married with 3 children and is a keen supporter of Burnley FC.

Robert’s participation has been made possible through Speakers for Schools partnership with the UK Automotive 30% Club and his school talks will include a focus on inspiring girls to consider opportunities in the automotive sector and encouraging all students to aim high.