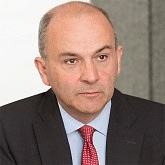 Robert Lind is an economist at the Capital Group, one of the world’s largest mutual fund managers headquartered in Los Angeles. Robert is based in London and analyses the European economy. Previously he was group chief economist at Anglo American and head of macro research at ABN AMRO. He has also worked as an economist at UBS and HM Treasury. He studied philosophy, politics and economics at Merton College, Oxford.