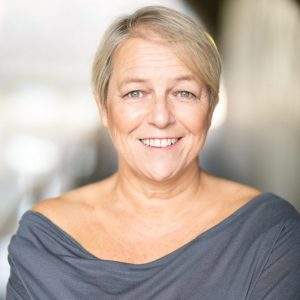 Susie McKenna Exec Creative Producer Hackney Empire and freelance Actor Writer Director. Susie originally trained as a dancer and singer . She has since been working as an actor, writer, and director for over 30 years working in theatres nationally and in the West End, Television and film. She also produced television documentaries for 4 years including Battle Axes for Channel 4 and Journey into Evil for ABC in the USA.

As an actor she toured national with shows such as Jesus Christ Superstar , Hair and the Rocky Horror Show . In regional theatre she appeared in many world premiers such as Queer Folk, Last Tango in Whitby and Saturday Night and Sunday Morning . Her West End credits include CATS playing Gumbicat ( she also repeated this role in the film of the show in 1997) and Grizabella, Ragtime ( Emma Goldman ) Chicago ( Mama Morton) Witches of Eastwick ( Eudora and Felicia ) TV includes Mr Bean, Taggart and Casualty. Films include Jack and Sarah , Storm Damage and Muppets Most Wanted.

After writing and directing the Hackney Empire’s first ‘in house’ pantomime, Dick Whittington, in 1998, Susie has both written and directed the pantomime at the Hackney Empire every year since. From 2005 to 2010 Susie was associate director at Hackney Empire working specifically on production partnerships for ‘in house’ productions and Creative Learning. In 2010, Susie went full time at Hackney Empire becoming Creative Director, responsible for artistic direction and programming alongside CEO Clarie Middleton, as well as managing the delivery of the creative learning and community programme including directing Hackney Empire’s Artist Development Programme main house show each year since 2000.

The Artists development programme has been successful in providing pathways for many current young professionals in the arts industries and has led to two Graduate theatre companies Hackney Harlem Theatre Company and the current TWIST Theatre Company. She is director and mentor on the Alter Ego talent show here at the Empire. Susie’s other main house productions at the Empire include : Blues in the Night, Beau Jest , Sit and Shiver starring Steven Berkoff, Kat and Tameka Show, La Variété , A Midsummer Night’s Madness ( NYC and Edinburgh ) and Once on this Island; a co-production with Birmingham Rep and Nottingham Playhouse.

In 2012 she was the festival director for Ha Ha Ha Hackney – a 7 show celebration of 60 years of British comedy for the London 2012 Festival Susie and her writing partner Steve Edis musically adapted Ian Serraillier’s The Silver Sword for the stage in 2015. The show opened at Coventry Belgrade theatre and toured nationally. Further productions are planned for 2017/18.

Susie is currently working on a gospel musical The Praise Singer, a revival of Blues in the Night for international touring , Gumboots revisited for Edinburgh festival 2018 , Martin Smiths KING to commemorate the 50th anniversary of Martin Luther King’s assassination in April 2018 , oranges and Elephants due to open a women’s writing festival at Hoxton Theatre in February and writing a book on pantomime to be published by Oberon books 2018. She has been nominated twice for the Gilder/Coigney International Theatre Award. Susie and Steve Edis’s latest pantomime Cinderella Opens at Hackney Empire in November 2017