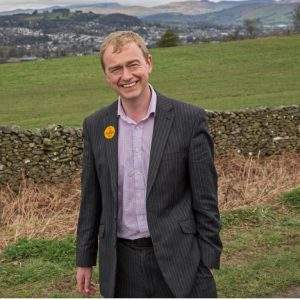 Tim lives in Milnthorpe, south Cumbria, with his wife Rosie and three of their four children. In his limited spare time, Tim enjoys following the (mis)fortunes of Blackburn Rovers, playing football, fell running, walking in the Lake District, listening to various kinds of music and spending time with family and friends.

Tim became an MP for Westmorland and Lonsdale in 2005 ending a 95 year rule by the Tories, winning by 267 votes.

Since becoming an MP, Tim has been extremely busy both in Parliament and especially in his constituency campaigning on things such as bringing back full cancer treatment services to Westmorland General Hospital; protecting rural bus services and pushing for better broadband.

He was elected as the President of the Liberal Democrats in November 2010, taking on the role in January 2011. In 2015, Tim was elected Leader of his party, until stepping down after the general election last year.

Since becoming an MP in 2005 Tim has dealt with over 98,000 constituents’ cases in his office and held over 600 advice surgeries in South Lakeland, two of the many things he enjoys about his work as an MP.