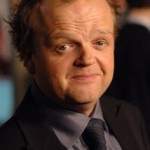 Toby trained at the Ecole Internationale du Theatre in Paris under Jacques Lecoq and began his career on the stage. Although he would make the leap to film and television, he returns to the boards frequently, including appearing on Broadway in the hit play The Play What I Wrote in 2003 after winning the 2002 Laurence Olivier Theatre Award for Best Actor in a Supporting Role for his performance in the London production.

Jones made his motion picture debut in the period piece Orlando (1992) starring Tilda Swinton. Small roles in a variety of films followed, including playing the doorkeeper in Les Miserables (1998).

He went on to appear on TV in productions such as the critically-acclaimed A&E/BBC mini-series Victoria & Albert (2001) and the HBO/Channel 4 production Elizabeth I (2005) with Helen Mirren and Jeremy Irons, as well the feature films Finding Neverland (2004), Mrs. Henderson Presents (2005) and Infamous (2006), in which he played his first starring role as Truman Capote. He also provided the voice of Dobby the house elf in Harry Potter and the Chamber of Secrets (2002) and Harry Potter and the Deathly Hallows: Part I (2010). His most recent projects are the role of Claudius Templesmith in The Hunger Games (2012) and Coll, one of the dwarves, in Snow White & the Huntsman (2012).