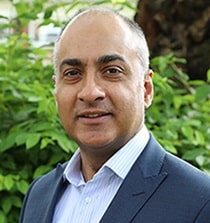 After graduating from Manchester University and being called to the Bar in 1991, he returned to Liverpool where he joined chambers and established his practice in the area of criminal law.

His experience as an advocate coupled with his interest in inter-faith work, led to a number of approaches being made to him as a British Muslim able to explain issues concerning Islam, issues which often caused concern for the wider public.

He gathered his thoughts in his book, “Just Your Average Muslim”, which exhorts Muslims to improve themselves, both intellectually and spiritually, in accordance with the spirit of their faith. For the wider community the book clarifies misconceptions about Islam and provides reassurance that a shared and prosperous future is not just possible, but is the key aim of citizenship.
Zia also began appearing in the media, culminating in his joining the panel of newspaper reviewers on BBC Breakfast in 2015. In the same year he was awarded an MBE in the Queen’s Birthday Honours list for services to interfaith relations in Merseyside.

In 2017 Zia was made an Honorary Fellow of Liverpool John Moores University and, in 2018, after 26 years at the Criminal Bar he took on a new role heading up the University’s civc engagement work. Since leaving this role in 2022 he has established Premier Advocacy, bringing together his advocacy and civic engagement backgrounds to help advise and train others.

In 2019 Zia was appointed as a Deputy Lieutenant of Merseyside.