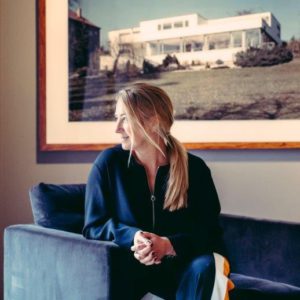 Anya founded her business in London in 1987 and has since grown into a global brand that has over 45 stores – including flagships in New York, London, Tokyo and LA – and is stocked in many of the world’s best retail stores, from Barney’s in New York to Lane Crawford in Shanghai.

The first accessories designer to hold an on-schedule London Fashion Week show, Anya Hindmarch shows have become renowned for their production and creativity. Highlights include models emerging from within a giant space-age Amphitheatre, an architectural mountainscape that took models and the audience on a journey through old Norse folklore and most recently an artful suburban house covered in anaglypta wallpaper which ended with the roof raising to reveal a giant disco ball.

In addition, the collections are showcased within seasonal pop-ups. These have included global Stickershops, an Anya Hindmarch ‘Service Station’, the first retail installation to be housed in the Selfridges London car park, which then travelled to Korea, Tokyo and LA and a series of giant pixel pop ups across China, Hong Kong and Japan. November 2017 saw the global launch of Anya Smells, a home fragrance category. Part of an ongoing commitment to recreating the every day in an extraordinary way, the first collection comprises of candles in two size and three fragrances developed with Lyn Harris that evoke happy memories of family summers spent in the sunshine, her morning routine and new born babies.

Creativity, modern craftsmanship and personalisation sit at the heart of everything Anya Hindmarch does. The launch of Stickershop shaped a global cult of leather stickers, allowing customers to create their own personal artwork. Taking an obsession with craftsmanship and personalisation a step further, Anya Hindmarch launched the Build a Bag concept in May 2017. The ultimate expression of our obsession with customisation, the Build a Bag concept unlocks hundreds of different combinations making each bag as unique as their owner.

There are also six Anya Hindmarch Bespoke stores, where customers can have drawings or messages in their own handwriting embossed by in-store craftsmen. Part of an on-going commitment to reconnect the craftsman and the customer, each bespoke piece is – as Anya says – about ‘having your name on something, rather than mine’.

A passionate advocate of British design and arts, Anya is also a UK Trade Ambassador, a Non-Executive Director of the British Fashion Council and a trustee of both the Royal Academy of Arts and the Design Museum. In 2017 Anya Hindmarch was awarded a CBE in recognition for her contribution to the British fashion industry and has recently received three prestigious Accessory Designer of the Year awards; a British Fashion Award, an Elle Style Award and a Glamour Women of the Year award.