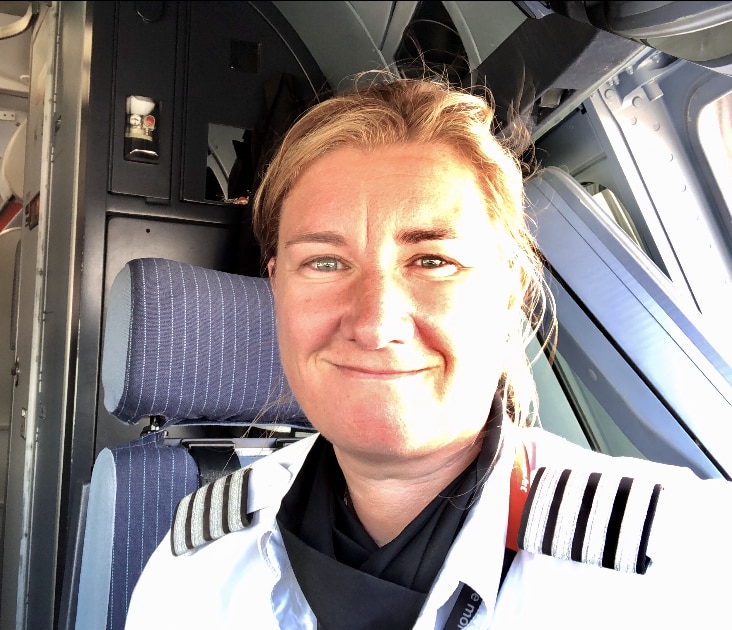 There are (far) more ‘endangered’ Bengal tigers in the world than there are female airline captains. About four times as many.

Until September 2020, Emma Henderson was a member of this rare and special flying club, getting thousands of passengers all over Europe safely every month over an 11 year career with easyJet.

Along the way she had to negotiate incredible challenges including escaping a house fire, failing at her first attempt at becoming Captain, supporting her brother who was left paralysed following a motorbike accident, and even overcoming a serious life-threatening illness. She did all of this whilst juggling life as a mum of three, based almost 600 miles away from her husband and family home.

Facing all of these challenges head on and coming out of each of them with a new appreciation for life and opportunity has been vital in her success, resulting in being nominated easyJet’s ‘Captain of the Year’ in 2018 – an award voted for by colleagues – as well as being one of only a handful of crew to be selected to represent easyJet as part of ITV’s ‘Inside the Cockpit’ in 2019.

With a career in aviation and overcoming the challenges she has, Emma could have been forgiven for riding out the COVID pandemic and taking a break as she waited for the world to return to normal, however it’s what Emma did next that may well be her legacy…

As the world began to stop in March 2020, having operated her final passenger flights to Luxembourg and back, Emma knew she would not be flying again for some time. With her deep understanding of, as well as loyalty and appreciation to, her industry Emma sought an opportunity to support the NHS when they were going to need it most whilst giving her colleagues a much-needed sense of purpose.

Thus, the latest chapter of Emma’s journey was begun as she co-founded Project Wingman – uniting the airline industry to provide well-being support to NHS frontline staff at the coalface of the pandemic.

Between March and May of that year, thanks to Emma’s leadership, determination and generous heart Project Wingman’s volunteer base swelled to over 6000 aircrew, drawn from all airlines, right across the UK and even into the United States.

2020 was a year of highs and lows as Project Wingman opened 94 lounges, reaching tens of thousands of NHS staff as well as supporting its own volunteers to develop their employability and recruitment skills as many considered a life on the ground, rather than in the sky. The more lounges, the greater the wave of positivity and goodwill grew as the NHS and aviation communities fought to stay positive.

Then in September came the reality many including Emma hoped would never come to light. As woman so passionate and dedicated to the job she loved, to her colleagues and crew, to her industry, Emma took the decision to accept voluntary redundancy in order to preserve the careers of those her junior, calling time for now on her career.

This was the latest example in Emma’s life of making the tough but right decision – a trait she has exhibited many times, even daily in the flight deck. Her ability to make tough decisions in the interests of the best possible outcomes combined with her repeated examples of overcoming adversity position her as an example of resilience and leadership to all, regardless of age gender or profession and in no small way explains the success of Project Wingman or the clarity with which it moves forward.

Such is Emma’s inspiration she is continually acknowledged by her peers and the wider public for her outstanding contributions to the social good. Awarded a Points of Light award in August 2020 as well as being recognised as a Woman of the Year. Whilst all representative of her work and dedication, it was recognition on a national level that came most recently as Emma was made MBE in the 2021 New Years Honours for her services to charity.

Emma’s story is one of self-reliance, humility and determination which she is happy to deliver to audiences across the world in the hope it can educate and inspire. Her message fundamentally delivers a lesson that everyone is capable of far more than they feel or realise. Calling on her experiences as a source of learning whilst recounting them with her typical compassionate, anecdotal style and wry sense humour result in a fascinating, emotive experience from a powerful role model.

Until September 2020 Emma was one of less than 500 female airline captains in the world, flying thousands of passengers all over Europe. As CEO of the charity she founded in March in response to the Covid pandemic, she had to choose to allow the sun to set on a flying career that has spanned three decades. Already well known in the airline industry, Emma starred in an ITV documentary “Inside the Cockpit” in 2019 and overnight became known as “Captain Emma”. Emma’s route into aviation is an unusual enough story on its own but the challenges she has faced throughout her career have taught her more than most about resilience, perseverance and grace, and she has used these skills to great effect at Project Wingman which has gained national acclaim uniting the airline industry in providing well-being support to NHS frontline staff across the UK and briefly, the US.

Emma’s story is one of determination, finding the good in everyone, looking for rainbows in dark clouds, and inspiring and empowering her team of 6000 volunteers, leading from the front and always with a generous heart. Throughout her career she received many personal letters and messages from passengers thanking her for the way she chose to treat them and her crew, and was nominated easyJets Captain of the Year in 2018.

Her charity has been widely acclaimed, supported thousands of people in the NHS and the airlines, and been acknowledged by the NHS, the airline industry and at government level and Emma was awarded membership of the Order of the British Empire for her services to charity in January 2021. Emma’s story is one of triumph over adversity, having faced a serious and life threatening illness, a failed first attempt at command, and many other challenges along the way including a house fire from which she and her parents were lucky to escape, in the same year as her brother narrowly escaped death in a motorbike accident which left him paralysed.

Emma has been inspiring the next generation of aviators throughout her career, mentoring aspiring pilots and taking part in STEM activities in schools and youth organisations, and was also a fear of flying presenter, bran ambassador and peer support mentor during her airline career. There have also been many high points and Emma talks of these with a passion that shines through her words, painting pictures of a life above the clouds that few have the privilege ever to witness.

To all who know her, Emma’s passion for her job has shone through and so her decision to accept redundancy in September 2020 is an emotional story of having to make tough but right decisions, and choosing to be grateful for what she has had and has been able to achieve. Emma’s “career pivot” from airline captain to Charity CEO has been inspirational and the fact that so many people are still giving their time to volunteer for the charity she created is testament to her leadership skills.

In addition, Emma is well versed in the transferable skills practiced daily by all pilots – teamwork, leadership, decision making, workload management and communication have been as much Emma’s bread and butter over the last decade as her ability to fly and Emma is qualified to speak with considerable knowledge on a wide range of topics as a result.

Key achievements are reflected in all she has done, and she has been widely celebrated across the industry for her achievements, being recognised as a Women in Business Woman of the Year in 2020, and as well as MBE received a Points of Light award in August 2020. Emma has been delivering motivational talks and presentations to a number of organisations since Autumn 2020 and her fascinating story, ability to inspire and empower, and her compassion and wry humour have delighted audiences in every arena.