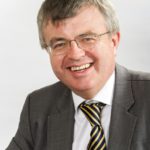 Chris, who originally comes from Barnsley, started his career as a Civil Servant working with Ministers in the Department of Health and the Treasury. Waiting lists, community care, consumer rights in healthcare, economic reform in Russia and the war in former Yugoslavia were among the issues he dealt with. He then started to regulate telecoms, before working in the insurance industry to work on pensions reform and to argue against the regulator. The only thing to do then was to set up a regulator – the Legal Services Board which was the over-arching regulator for all lawyers and the legal sector in England and Wales. Having run that for 6 years, Chris moved in January 2015 to run the MDDUS which meets the cost of negligence claims against doctors and dentists and defends them when they are prosecuted by their regulators!