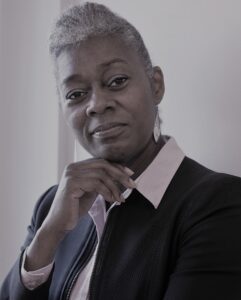 Dr Angela Herbert MBE began a career in the Criminal Justice System over 37 years ago; first volunteering for 13 years in a young offenders’ institution and then working at a senior level in a London Prison before transferring to Prison Service policy in the Ministry of Justice.
Education and skills in prison and institutions is a key area of interest for Angela since people of African Heritage are consistently and disproportionately represented. 26% of the adult prisoners population and 56%. young offenders more than half, identify as people of African Heritage.
She seeks to prevent young people encountering the criminal justice system and supporting those who are in its clutches to access hope, equity, and employment.

Angela is a volunteer community ambassador specialising in support for predominantly people of African Heritage; she Chair’s the Violent Crime Prevention Board and London Borough of Brent Police Independent Advisory Group. She is the Director of IOTC-Solutions , Co-director of Innovate for Growth CIC and Founder and Director of Made on Purpose ; organisations that are all committed to social change.
Angela has engaged in a range of initiatives that support the improvement of relationships between communities and the police and vice-versa. Her mantra is that police are not from a ‘special land’ but are indeed members of the communities that they serve. To this end she has initiated a range of approaches to disrupt the status quo and hopefully promote positive engagements across the country.

She is an engaging and inspirational public and motivational speaker specialising in social matters, promoting equality and innovation to support individuals especially those from ‘marginalised’ groups in society whom she seeks to give voice. She achieves successful outcomes using her model derived from her doctoral thesis, IECR (Identify, Esteem, Competence and Resilience). She supports initiatives that practice change, provides opportunities and inclusivity, and encourages individuals to use the powerful resources derived from lived experiences.

Angela Chairs the Violent Crime Prevention Board and uses her influence to work with likeminded business and community leaders to create opportunities for communities to encourage hope and aspiration. We host a range of events and meetings that links venture capitalists and community members to access resources and mentorship to achieve their business and career goals.

She was awarded an MBE in 2008, in recognition of her services to the Prison Service and crime
In 2015 she was commissioned to write a publication for Springer dedicated to Martin Luther King, called, ‘Now is The Time and published a book of re-affirmations of which 100% profits are gifted to girls and young women called Another day to be…