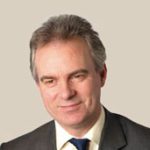 Deputy Governor, Monetary Policy at The Bank of England

Dr Ben Broadbent became Deputy Governor on 1 July 2014. Prior to that, he was an external member of the Monetary Policy Committee from 1 June 2011. In addition to his membership of the Monetary Policy Committee, Financial Policy Committee and Prudential Regulation Committee, he has specific responsibility within the Bank for Monetary Policy, including monetary analysis and notes. He was formerly an Economic Adviser at HM Treasury, and Assistant Professor of Economics at Columbia University from 1997-2000. For the decade prior to his appointment to the MPC, Dr Broadbent was Senior European Economist at Goldman Sachs, during which time he researched and wrote widely on the UK economy and monetary policy. Ben Broadbent graduated with a BA in Economics from Cambridge University in 1988, and in 1997 completed a PhD in Economics at Harvard University, where he was a Fulbright Scholar. Ben’s outside interests include classical music (piano, violin), hillwalking, cricket and football.