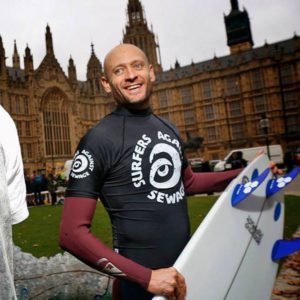 Hugo Tagholm if the Chief Executive of the national marine conservation and campaigning charity Surfers Against Sewage. He is an environmentalist, campaigner, surfer, charity professional and a TEDx speaker.

Surfers Against Sewage has evolved from a single-issue pressure group into one of the country’s best loved marine conservation charities. Driven by people who actively use the our oceans and beaches, it represents over 350,000 regular supporters and now mobilises the biggest beach clean community in the UK, some 50,000 volunteers annually contributing over 150,000 hours of time to protecting beaches nationwide. It’s priority issue today is plastic pollution, which is frequently top of the global environmental agenda, as the Blue Planet recently documented.

The charity campaigned successfully for the 5p plastic bag charge which has already stopped 9 billion bags from entering the environment. It is now focused on calling for a deposit return scheme on drinks containers to protect our beaches, countryside and streets from plastic bottle pollution.

It continues to be at the forefront of protecting and improving water quality at UK beaches, and works tirelessly across a range of issues from climate change to human health & wellbeing in our oceans. Internationally recognised, this year has seen the charity take its message of ocean optimism to the UN Oceans Conference in New York, the Our Oceans Conference in Malta and organises many events through its own All Party Parliamentary Group in the Houses of Parliament, where it brings together leading voices of marine conservation, MPs and ministers to discuss new measures to protect the ocean.

It was recently honoured to be asked by HRH The Prince of Wales to organise the Ocean Plastic Awareness Day in Cornwall, showcasing NGOs, Charities, politicians and business leaders working to stop plastic pollution.

It has a team of 20 staff in its St Agnes head office and 150 Regional Reps around the UK. They are proud to be creating global marine conservation impact from Cornwall.