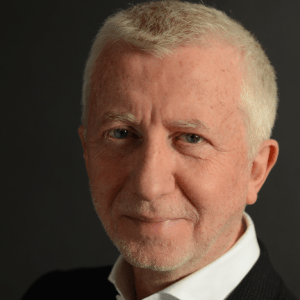 Jimmy was one of the founders of Hat Trick Productions in 1986 and since then has seen it grow into one of the country’s leading producers of comedy, drama and entertainment, regularly bringing to the screen distinctive and popular series, including ‘Derry Girls’, ‘Father Ted’, ‘Outnumbered’, ‘Drop Dead Gorgeous’, ‘Fonejacker’, ‘Room 101’, ‘The Kumars at No 42’, ‘Drop The Dead Donkey’, ‘Whose Line Is It Anyway?’, ‘Bodies’, ‘Life Isn’t All Ha Ha Hee Hee’ and ‘Worst Week of My Life’ and of course, ‘Have I Got News For You’ which Jimmy created in 1990.

In the US Hat Trick launched ‘Whose Line Is It Anyway’ in 1997 which ran on ABC for seven years and was the very first British series to be recreated for American network television by a British producer.

In 1999 he received the BAFTA Award for Outstanding Creative Contribution to Television. Jimmy is a Fellow of the Royal Television Society and recently received an honorary doctorate from the University of Liverpool. Before moving to television in 1982, he produced for BBC Radio, where he developed and produced the award-winning Radio Active.

For more than 25 years Jimmy has been working with some of the best writers, producers, performers and crew – not to mention a superb back-up team – who in turn attract the best on-screen talent. Hat Trick remains at the forefront of the creation of new television. Some of the brightest names in British television began their careers and continue to build them under the Hat Trick brand.