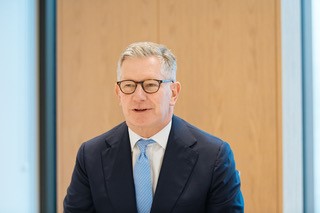 John is a senior executive with a career spanning over three decades, the majority in the fast-moving broadcast, technology and creative sectors. He possesses significant Board experience and is best known for his roles at ITV and Arqiva.

John has built significant knowledge of leading businesses through volatile and challenging times. He knows how to change situations for the better, using leadership skills to inspire the organisation and restore stakeholder confidence. John’s leadership style centres on providing direction through a shared strategic vision, building a dynamic culture, and delivering improved financial performance.

At ITV, John held a number of senior finance and management roles before advancement to Chief Operating Officer, Granada/ITV Productions responsible for all global Film & TV production, together with licensing and merchandising of content. He was appointed to the ITV plc Board in 2006 where he served as CFO, COO and Interim CEO. In addition, he is widely recognised for his role in successfully steering the business through the 2008/9 financial crisis.

John served as Chief Executive of privately owned Arqiva for five years leading a cultural, strategic and financial turnaround. More recently he was Chief Executive of the Bibby Line Group, a 200-year old diverse family company, standing down at the end of 2020 having completed the transformation of the group portfolio.

John has served as a non-executive director of Capita plc for six years, where he has also chaired the remuneration committee.

He has previously served as a non-executive director of The Ambassador Theatre Group, Liverpool Football and Athletic Grounds plc (where he remains a Life Vice President) and Imaginarium Holdings Ltd.

John is a professional mentor and a regular contributor to Speakers for Schools.

John holds an Economics and Politics degree from the University of Keele and qualified as a chartered accountant with KPMG. He attended the Harvard AMP programme in 2005.