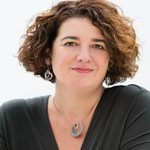 Moira Sinclair is Chief Executive of the Paul Hamlyn Foundation, an independent grant maker whose vision is for a just society in which everyone, especially young people can realise their full potential and enjoy fulfilling and creative lives. PHF wants to be an effective and independent funder, using all our resources to create opportunities and support social change and we partner with inspiring organisations and individuals to achieve that.

Previously, as Executive Director London and South East for Arts Council England, she oversaw a portfolio of 322 funded cultural organisations and contributed to national policy development, with a particular focus on the resilience and sustainability of the cultural sector and workforce development. She played a key role supporting the cultural programme for the London 2012 Olympic and Paralympic Games and continues to support its legacy at home and internationally.

Before joining Arts Council in 2005, Moira was Director of Vital Arts, an arts and health charity. She has also worked in local government, and in theatre and production management. A graduate of Manchester University where she studied drama, Moira became a Clore Fellow in 2004/05. She is Chair of East London Dance, Chair of Clore Leadership and a member of the British Library Advisory Council.