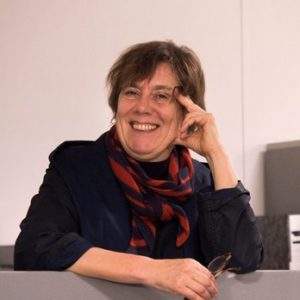 Rebecca O’Brien began her film life working at the Edinburgh Film Festival. After a short stint in theatre admin she took a one week film production course and fell headlong into production. She worked on early Channel Four films and dramas, including “My Beautiful Laundrette” (as Location Manager) and the Michael Rosen inspired multi-cultural kids’ series “Everybody Here”. Her producing debut was “Friendship’s Death” written and directed by Peter Wollen and starring Tilda Swinton and Bill Paterson. Her first film with Ken Loach was “Hidden Agenda” and since then they have made sixteen feature films together and many other documentary and short projects. In 2002 they formed Sixteen Films. Apart from the Loach/Laverty films, Rebecca also produced the “Bean” movie for Working Title, “Princesa” for Parallax Pictures and has executive produced for Camilla Bray, Ian Knox and Henrique Goldman.

She has sat on various film industry boards including PACT, The UK Film Council and South West Screen. She is currently a member of the Film Industry Training Board, the British Screen Advisory Council and the Board of the European Film Academy.