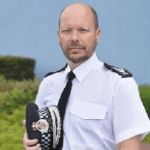 Rod Hansen joined Gloucestershire Constabulary as Deputy Chief Constable in May 2013 and in May 2017 took over as Chief Constable.
Rod started his career at Avon & Somerset Constabulary more than 30 years ago and during that time has covered a variety of roles from patrol inspector in central Bristol to District Commander for Bath and North East Somerset. Other postings also led to him working on the force surveillance team and reviewing child protection arrangements. He later helped to establish a 10 year Joint Venture Company delivering enabling services to 3 police sector organisations including the Constabulary. As a senior investigator, he has investigated deaths in two other forces and played important roles in serious and organised crime investigations.
Rod has been a hostage negotiator since 1998 and for a number of years was the South West Regional Co-ordinator for negotiating. He was course director for the regional negotiators course and in October 2003 trained negotiators within the Greek police service in preparation for the 2004 Olympic Games in Athens.
Rod is also the Chief Police Advisor to the military Joint Task Force Headquarters (JTFHQ) and part of a multi-agency team of non-military advisors working closely alongside colleagues from the Stabilisation Unit, Department for International Development, Foreign and Commonwealth Office and a variety of volunteer and charitable groups such as the International Red Cross.
His deployments to date include; Somalia to help devise the next phase of the United Nations (AMISOM) plan to bring security to the wider Horn of Africa, the Masai Mara, Kenya, working with Kenyan and Ugandan Rapid Deployment Forces on flood relief, food assistance programmes, malaria and refugee reduction. Rod also assisted in the fast time provision of a UK police capability to assist the British military in extracting British nationals from Libya during the recent fall of the regime. Op Ruman was the largest UK military operations since Afghanistan, and Rod assisted in providing IPRC support following Hurricanes Maria and Irma in the Caribbean, and the subsequent humanitarian crisis.

Rod is also the current National Police Chiefs’ Council lead for aviation, mounted policing and police dogs.
Rod is particularly passionate about how we use soft power to influence or affect others. Since becoming Gloucestershire’s Chief Constable he has introduced a ground breaking supportive leadership and wellbeing programme which has transformed the culture of the Constabulary from authoritarian command and control to one where soft power and supportive leadership achieves outstanding results. The effect has been described by National academics as ‘astonishing’. It raises self-awareness, self-confidence and a healthy resilience that provides an environment where everyone can thrive.