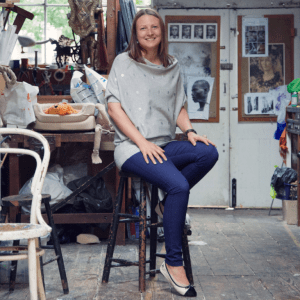 Samantha’s career thus far spans both the world of theatre and the world of education. She is currently Artistic Director and CEO of Little Angel Theatre. In this role, she has overall responsibility for the organisation’s strategy and artistic output. Her directing credits at Little Angel Theatre include Let’s Fly , Me… , The Singing Mermaid , Kika’s Birthday , Junk, Finding Santa and The Flying Bath.

Prior to working at Little Angel, she was Director of Projects at the Almeida Theatre for eight years. Almeida Projects was the Creative Learning department at the Almeida. In this role, she made work by, for and with young people aged 15 to 25; and she was the course director for the Almeida element of the PG Certificate in Applied Theatre with Young People (in partnership with Central School of Speech and Drama), which involved training adults in facilitation skills. She was responsible for the strategic vision of the Almeida’s work for young people, and she managed a team of 5 full time staff who supported the delivery of this work.

Samantha is also an Education Associate for the Michael Grandage Company. At the Michael Grandage Company, Samantha co-devised and delivered an education programme to support the company’s inaugural season on the West End. She continues to support the company, consulting on MGCfutures, the company’s education programme. Samantha also managed the education department of the Queen’s Theatre in Hornchurch where she created numerous Theatre in Education shows for primary and secondary schools, as well as directing community plays with casts of 60+ people.

As a Freelance Director, Project Manager and Facilitator, Samantha has worked for a number of arts organisations, in the UK, Canada and Singapore. She is author of Directing Theatre with Young People: A Guide to Staging Plays with Young Casts which includes exclusive interviews with Anabel Arden, Michael Attenborough, Matthew Dunster, Richard Eyre, Robert Icke, Indhu Rubasingham and Lyndsey Turner.

Samantha is qualified to Masters level in Text and Performance (Kings and RADA), where she focussed on a Directing pathway. Her first degree was in Theatre and Performance at the University of Warwick. Samantha is also a trained teacher (PGCE / QTS), and taught English and Drama, both in a state secondary comprehensive and at an Independent school.