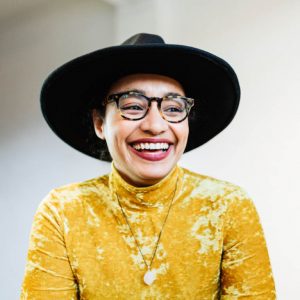 Sereena Abbassi is committed to creating organisational transformation that is grounded in a deep-seated belief that all our liberations are tied to each other. Her approach is both creative and strategic – and done with lots of heart. She is the Worldwide Head of Culture & Inclusion at M&C Saatchi Group, an Activist, an Equity, Inclusion & Diversity Consultant, Facilitator/Trainer, Public Speaker and Writer.

Having gone to The Brit School as a teenager, and later continuing her studies as a Visual, Performance and Sound Artist at The University of Brighton, and more recently pursuing an M.A. in Postcolonial Culture & Global Policy at Goldsmiths University; her practice is deeply holistic.

Where the visceral and intellectual come together as one.

Sereena has worked with organisations such as Airbnb, Facebook, ICA, Kew Gardens, The Mill, Ustwo and Creative Equals, and has spoken at D&AD, Campaign 360, UCL, LSE, Liverpool University, Royal Albert Hall, Viacom and Monzo to name but a few. She has written for Campaign Live, Communication Arts, The Drum, has featured in The Observer and has appeared on CNBC, Foundation Radio, It’s Nice That’s podcast Lectures in Progress and Fiverr’s podcast Nine Twenty Nine.

She is a Board of Trustee for the charity Sour Lemons and sits on the Advisory Board for the social enterprise The Other Box.

Last year Sereena was nominated as one of Campaign’s 50 Trailblazers of the Future and Stars of 2018, Pitch Magazines 100 Creative Superwomen, and The Dots 100 top Black Creatives. Sereena currently sits on the advisory board for The Other Box and had previously sat on the board of Diversity in Marketing and Advertising Summit (DIMA). She is a Sour Lemons Trustee.

Sereena has spoken at D&AD, Campaign 360, The Mill, ICA, UCL, Liverpool University, Viacom, Monzo, Ustwo, YCN, Bloom and the Oxford Media Convention, to name but a few. She has written for Campaign Live, Communication Arts and The Drum and was recently featured in The Observer; she will be judging this years’ New Blood D&AD category, Mckinsey Design & The Case For Her.

Sereena is currently working towards a part-time masters in Postcolonial Culture & Global Policy at Goldsmiths, University of London.

She is British, Persian-Iranian, Jamaican and has lived and worked in the U.S, the Netherlands, Iran, Spain & UK.