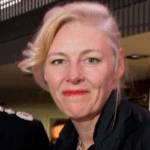 “Sharon Ament is Director of the Museum of London, which in 2015 announced its ambition to build a new museum for London and move to a new site in West Smithfield. Since joining the Museum in 2012, Sharon has been steering the next phase of the organisation’s development to more fulsomely reflect the energy and dynamism of London itself. In recent years, the Museum of London has achieved a record 1 million+ visitors, helped along by extremely successful exhibitions including; Fire! Fire!, The Cheapside Hoard, The Crime Museum Uncovered, and Tunnel: the Archaeology of Crossrail, engaged more school children than ever, and acquired both its largest object – Heatherwick’s Olympic Cauldron from the London 2012 Games – as well as a fatberg!

Sharon is a cultural ambassador for the Mayor of London and member of the Mayor’s Cultural Leadership Board; on the London Area Council of Arts Council England, Chair of the London Screen Archives and Co-Chair of the Women Leaders in Museums Network. She teaches, advises and presents internationally; and together with partners including the Barbican Centre, Guildhall School of Music and Drama and City of London Corporation is nurturing the development of Culture Mile. Sharon is a Noyce Leadership Fellow, a member of the Conseil Scientifique of Universcience in Paris and on the International Advisory Board of the ArtScience Museum in Singapore.”