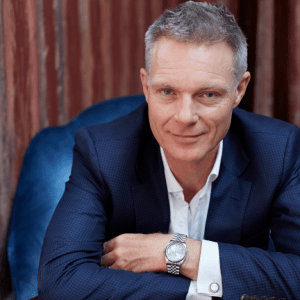 Tim Marlow is Artistic Director of the Royal Academy of Arts. Joining the Academy in 2014 as Director of Artistic Programmes, he became Artistic Director the following year. He oversees six departments from the RA’s exhibition programme to Collections, Learning, Academic Programmes, Publishing and Architecture. Prior to his appointment at the Royal Academy, Marlow was Director of Exhibitions at White Cube for over 10 years (2003-2014).
Marlow has been involved in the contemporary art world for the past twenty-five years as curator, writer and broadcaster. Having trained as an art historian, he has also worked with many of the most important and influential artists of our time including, Ai Weiwei Hon RA, Antony Gormley RA, Damien Hirst, Theaster Gates, Anselm Kiefer Hon RA, Tacita Dean RA, Cerith Wyn Evans, Tracey Emin RA, Gilbert & George RA, Julie Mehretu, Doris Salcedo and Mark Bradford.
Marlow is an award-winning radio and television broadcaster who has presented over 100 documentaries on British television and has presented programmes on BBC Radio since 1993. He was the founder editor of Tate magazine and is the author of numerous books and catalogues. He has lectured, chaired and participated in panel discussions on art and culture across the globe. His scholar’s perspective along with his humour and vim make him one of the most influential people in the art world.
Marlow sits on the Board of Trustees for the Imperial War Museum, Sadler’s Wells, Artichoke, Art on the Underground Advisory Board, The British School at Rome and Cultureshock Media.