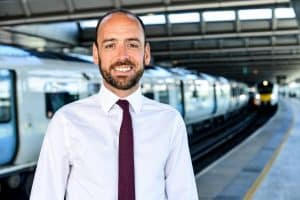 Tom became Managing Director of Thameslink & Great Northern Railways in July 2019 and has been instrumental in restoring the service quality and reputation of TL and GN with customers and stakeholders.  He sees the railway as an essential part of national life and loves having the opportunity to deliver a great service and constantly try to make it better.

He is passionate about customer service and CSR and has led GTR’s ‘Caring for the Vulnerable’ work to help the passengers, colleagues and communities affected by COVID-19. He also chairs the GTR-Network Rail Customer Alliance Board which champions passengers’ interests.

Since joining GTR Tom has overseen major improvements to our service including the £240m investment in new trains for our Great Northern customers, which has contributed to Great Northern twice being the most improved railway in the country in the National Rail Passenger Survey and achieving its highest ever score of 86% in the Spring 2020 survey. Tom is also responsible for the Passenger Benefit Fund – GTR’s £15m investment in improving every station across our network.

Prior to joining the rail industry, Tom was part of the executive team which transformed the Post Office, serving as Operations Director, Group Strategy Director, HR Director and Development Director over nearly seven years.

He started his career with the CBI and soon found his passion for public services, eventually rising to the role of Head of Public Services Policy before moving to KPMG to work as a management and strategy consultant.  In his four years at KPMG Tom led award-winning work to transform how West Midlands Police handled and investigated crimes but is most proud of his 3 years working on the team which delivered the London 2012 Olympics.

Tom lives in north London and is proud father to two young children, who leave him no time for any interesting hobbies.