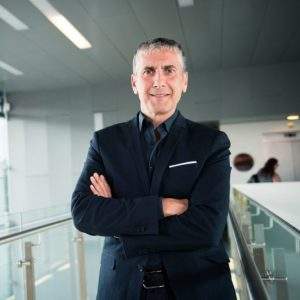 Tom Toumazis MBE has a portfolio of directorships focused in technology, media and the arts. He’s a founder investor and Chair of four start-ups from a variety of industries from data analytics, to online art retail, from mobile games and most recently, the biggest Expo in the UK for the Hemp, CBD and Legalised Cannabis industry. He is an External Director of the Performing Rights Society for Music, the leading music rights organisation in the world. Tom has held senior roles in the film and entertainment world at ITV, The Walt Disney Company, Eurosport, Endemol Shine and Yahoo! He’s run small and large businesses, from start-ups to businesses employing over 7,500 people.

Tom is a public speaker, sharing his work/life experiences and encouraging young people to explore a career in the world of media and entertainment. He supports Speakers for Schools & London South Bank University, where he’s a Visiting Professor of Business and an Honorary Fellow.

Tom is also a Trustee of the NSPCC and has helped raise over £14 million over the last 15 years. He has run 8 London Marathons for Childline and is currently in training for number nine along with his two sons. He’s a big Arsenal fan, a movie addict and more recently become addicted to swimming in Hampstead Ponds!

He was awarded an MBE in 2015 for services to children.